In the early weeks of the war, the Foreign Service battalions of the Regiment, the 1/4th and 1/5th, found themselves deployed to India rather than the anticipated Western Front. On arrival they were to take over garrison duty, so that units of the regular army could be sent as reinforcements to France.

Stationed in Sandwich before they departed, the two battalions sailed from Southampton on 29 October 1914. Their voyage took over five weeks and included stops at Port Said, Suez and Aden. On reaching Bombay in early December, the 1/4th was deployed to Jubbulpore, the 1/5th to Jhansi. Many of the men wrote home to family and friends giving detailed accounts of their journey to India and descriptions of life their from the food to the local people.

Private Charles Reginald Hayles (born 1894) of 1/4th Battalion Royal West Kent Regiment of Bromley had enlisted with the Territorials at the Tonbridge Depot on 2 September 1914. He wrote home from Sandwich Bay:

I am getting on very well now. It was very strange at first, but I soon got used to it. We are doing a lot of work here, and we do not get much time to ourselves. We are quartered in the large house on the seashore. We are treated very well, with plenty of food, but very plain. We are making the most of that. My bed is the hardest I ever had, being the bare floor with one blanket, with a kit bag as pillow, but I am happy with it all. It is doing me a lot of good. I don’t think it will be long before we go abroad.

At Port Said several Egyptian natives came on board with oranges, cigarettes, etc and did a good trade. It amuses us watching the traders try to do business in boats just off our ship. Whenever they came near the vessel they were drenched with water from one of the ship’s hosepipes. Leaving Port Said, we had a lovely sail in the Suez Canal for 96 miles. We passed several native villages, and also saw many troops – native and English.

For the greater part of the way there were high sand mountains on either side. Ships have to steam very slowly on account of the wash created, and it took us just a day to get through the canal. We then entered Suez Harbour, and remained there for a week, seeing much to interest us.

Before any of the Egyptian traders were allowed on board the boat their goods were inspected by one of the officers. Two-thirds of our men were allowed to have a stretch on shore at Suez, and went for a short march through the town. Great difficulty was experienced in re-embarking. The men boarded a destroyer, which made four unsuccessful attempts to get alongside the transport. Eventually some had to jump up on deck, and one chap fell in the sea. He was promptly rescued by a stoker from the destroyer.

So grateful we’re our men for the work of the destroyer’s crew that a collection was made on board, and a sum of £30 raised. The money was sent to the lieutenant, who was told it was a mark of our appreciation. The naval officer, however, said his men accepted our thanks, but could not receive the money, as it was their duty to help the Army. He recommended that the amount should be sent to the fund for the relief of those engaged with the destroyer flotilla in the ships, which were being escorted by HMS Sydney, the one that destroyed the Mandan. The Sydney and HMS Falmouth will be our escorts on the last lap to India.

It is not like Christmas weather, but rather like mid-summer. The temperature is about 105 in the shade. We have to wash our own clothes in cold water. We have sports on board and they create plenty of fun. We also have concerts twice a week.

After remarking upon the rough weather experiences at several points of the journey, Private Thake goes on to say that his Company did very well in the sports on board ship.

In a point-to-point race, D Company were second among the whole battalion, and in a boxing tournament they had hard luck, as several of the men picked for the team fell sick, and could not take part. The officers and sergeant had a tug-o’-war, the former winning.

Private Francis Pelham of Offham near Lewes wrote home describing how he and others in the regiment had spent Christmas in India. Extracts of his letter home were published in the Sussex Express:

I went on guard Christmas Eve till 7.00 a.m on Christmas morning. Some of our chaps were on all day. We had a fine breakfast to start with, ham and eggs. At dinner we had chicken, roast beef, etc, as much as we wanted, not to mention the plum pudding, which was a treat. £25 was sent from Sevenoaks to help pay for some of it, and, altogether, we had a fine spread.

According to the paper:

Private Pelling goes on to say that the Tommies are very comfortable in barracks, and the native barber goes round and shaves them while in bed. Private Pelling was always ambitious, and we are not surprised to hear that he is learning Hindustani. About a dozen of them are having daily lessons from an Indian.

Private Godley, son of Mr Godley of 4, South Grove, Tunbridge Wells, wrote back to his father and described his journal from Bombay and arrival at Jubbulpore:

We arrived at Bombay on 3 December, after a very monotonous journey. We stepped straight off the boat ship into the train, which was almost half a mile in length. The scenery was very fine as we ascended the mountain. At midnight we had risen 2000 feet, and it was very cold. I looked out of the window as we were passing a deep chasm, and it made me hold my breath for a minute. Among the many points of interest was a waterfall, and it looked magnificent by moonlight.

After a brief station stop at about 3 o’clock in the morning, he continued:

We then started to ascend some more mountains, and the summit was reached about 12 p.m. but here the top was mangled with snow, and by Jove, it was cold!

I cannot really describe the scenery, as it was really magnificent. We arrived at Jubbulpore about 10 p.m and marched to a field, where we were given a splendid reception. Cheer after cheer went up as we marched here. A good breakfast awaited us, and English girls waited on us.

The Scouts’ band accompanied us to our barracks, a distance of two miles; but it was awful marching as the roads are about four inches in dust, which rises in clouds, and fills ones nostrils. About 1 o’clock we were settled in our new home. The barracks consist of bungalows, just sufficient to take a company, and they are all very high-pitched and fitted out with fans. We have an institute connected with the barracks, fitted out with billiard rooms, reading. and writing etc, and we also have a picture palace on the grounds. The days here are so hot and the nights very cold. In the summer it is 130 in the shade. The food is fairly good, the meat being mostly goat, which I don’t like at all. 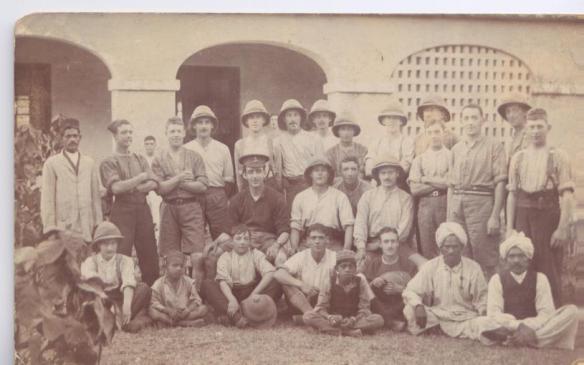 We reached Bombay on the morning of December 2nd, and started for Jubbulpore about 7.30 in the evening. After two nights and one day we arrived at our destination, and after having refreshments which some ladies had got ready for us we marched to the barracks headed by the Somerset’s Brass Band. It is a very nice place here, the food, beds and general arrangements being very good.

We don’t get much to do besides our parades; the natives seem to do it all. The drums have a room to themselves, and we pay three natives four Annas a week to clean our boots, buttons and bugles, and run anywhere for us.

It’s not so very hot here yet; about like an English summer in the day, but cold at night. They tell us the thermometer goes up to 112 degrees in the shade in the summer. We have had two route marches of about five miles. The men on guard had some frights at first. The jackals and laughing hyenas come nearly up to them, and ‘then run away laughing’. We often go to the native village in the evening for a bit of sport. If you want to buy anything you have to haggle for about half-an-hour, then turn to walk away. They soon shout out, ‘Ere y’ar, sa’b’ and the bargain is struck. But things seem jolly dear except cigars, which we can buy for one rupee four Annas a box.

We have a church parade every Sunday, and when inside it is just like being in England to see all the white people there.

I have not had a very good Christmas, being in hospital with an abscess in the throat, but the companies all had a good time – plenty of chicken and turkey, plum pudding, smokes and drinks.

One of our officers told us we were here to undergo ‘Kitchener’s test’ which is a 16 mile march, three hours’ attack, three hours’ defence, and then 16 miles march back, before going to the Front in the course of a few months.

We find a great difference in India in climate and people. The climate is a lot too hot for us, for we were not at all climatised before we came out.

I hope to go out one night for some sport (shooting jackals and hyenas), having had the offer of a sporting rifle.  The day I received your letter I went out for a field day. We started at 8 o’clock, and marched three miles, and then we started our attack on a hill about three and a half miles away, and by the time we had finished and marched back it was nearly 3 o’clock, so you see we had a long day in the broiling sum.

You can imagine how strange everything is to us, seeing so many black people, and some of the ways of these individuals are very comical. I don’t know whether they believe in the Suffragette movement, but the women seem to do most of the work, whilst the men sit down in a ring and smoke their peculiar pipes. It is nothing to see a woman on top of a ladder whitewashing a wall.

We have been here two or three months, and have only had one lot of rain, which caused as much excitement as seeing an aeroplane for the first time. We came here in the middle of winter, but it was hotter than the English summer., but very cold in the early morning and in the evening.

A soldier’s life is very different out here to what it is in England. Everything is done for us in the way of cleaning our kit up by black boys, who do it for four annas a week, and a barber shaves is for two annas a month twice a day. A soldier in India generally has a very easy time where parades are concerned, but it is not so with us. They are putting us through it a bit stiff, but none of us mind the training so long as it results in going to France, where we are all eager to get.